Ethereum Classic was up over 50% this week as the cryptocurrency market tipped into the green.

The coin is likely seeing investment interest as Ethereum moves closer to its version 2 upgrade, named the consensus layer.

By combining the technology of ETH with the philosophy of BTC, ETC is uniquely positioned to be the Smart Contract Platform of the future, as other chains become compromised or captured by special interests.

One drawback for ETC is their “long-term commitment to Proof of Work consensus.”

The recent MiCA regulations from the European Union hinted that cryptocurrency may be limited based on their energy usage. Proof of Work coins are more energy-intensive than Proof-of-Stake and the coin could lose ground to its sister coin Ethereum, which is moving to a PoS model.

Ethereum Classic is looking to absorb miners who are left out in the cold from the Ethereum upgrade:

The Ethereum Foundation is expected to migrate it’s EVM network to proof of stake consensus in Quarter 2 of 2022 through an event labeled “The Merge”. We recommend planning your equipment migration to ETChash prior to the Merge. This Merge event will disenfranchise the largest EVM’s Proof of Work mining ecosystem. Ethereum Classic is well positioned to absorb much of this abandoned Ethash hashrate.

The price of ETC is now trading at $40 after seeing lows near $20 and the weekly chart hints at a potentially solid base in price for further gains.

The price of Ethereum was also higher on the week at $2,917 as the coin targets the $3,000 mark once again as risk markets heal from the Ukraine war.

Traders are also betting on big demand for Ether staking as the coin moves to 2.0. Ether staking yields could in the range of 10% to 15% following the Ethereum 2.0 upgrade.

I am very bullish on ether for the summer as ether staking would offer returns better than real or inflation-adjusted yields in traditional markets after the merge.

The APE coin was the highest gainer on the week at 900% and the coin is seeking to capitalize on the popularity of the Bored Ape Yacht Club NFT craze. The project counts a co-founder of Reddit and a co-founder of Animoca Brands amongst its founders.

ApeCoin describes itself as “a token for culture, gaming and commerce used to empower a decentralized community building at the forefront of Web3.”

The ERC-20 digital asset is “owned and operated” by a DAO, which will give investors the ability to vote on governance and benefit from an ecosystem fund. The initial airdrop saw 15% of APE’s total supply being distributed to owners of Bored Apes and Mutant Apes, while 62% of tokens have been earmarked for the community.

However, an official announcement said that ApeCoin will be available to everyone and will start “trading on major crypto exchanges as soon as possible.” Binance has already confirmed that APE will be available in trading pairs against Bitcoin, Binance USD and Tether.

The possibilities for blockchain’s impact on culture are so endless that they can’t possibly all be predicted yet. APE is a token made to support what’s next, controlled and built on by the community.

ApeCoin is underpinned by the Ape Foundation, which is designed to “act as the legal steward of ApeCoin and administer the decisions made by the community” — put in other words, the project’s official Twitter account says this organization intends to “sign the checks.”

The developers hope that the foundation will become more decentralized over time — and ensure the ecosystem grows “in a fair and inclusive way.”

A use case for ApeCoin has already emerged, with the coin being accepted in Animoca Brands’ Benji Bananas game.

Decentralized finance projects did well in the last week and the best of the bunch was Convex Finance (CVX).

Convex Finance was created to absorb the liquidity of CurveDAO and to incentivize investors to stake more of their CRV. Before Convex Finance, Yearn.Finance was already bidding to dominate that space. However, it couldn’t succeed.

Then, on 2 March, Convex Finance secured the fifth largest DeFi protocol spot with total value locked (TVL) at $12.5 billion. Yearn.Finance was positioned well below that in fourteenth spot with just $3.5 billion in TVL. 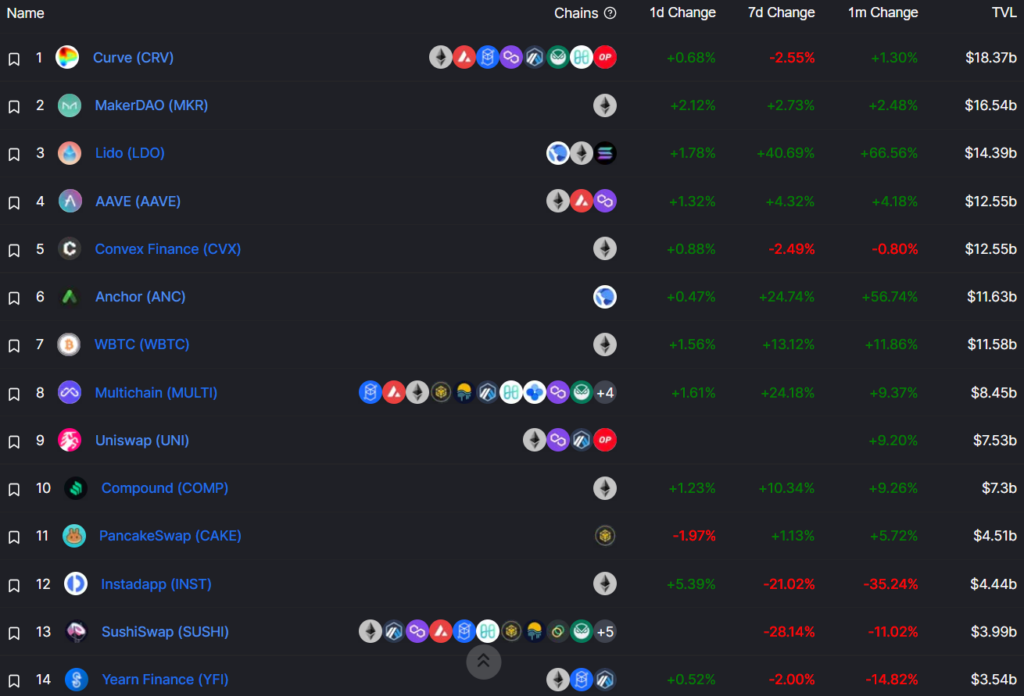 CVX gained 30% on the week and now has a market capitalization of $1 billion with a price of $20. The all-time high in the coin is around the $60 price level.